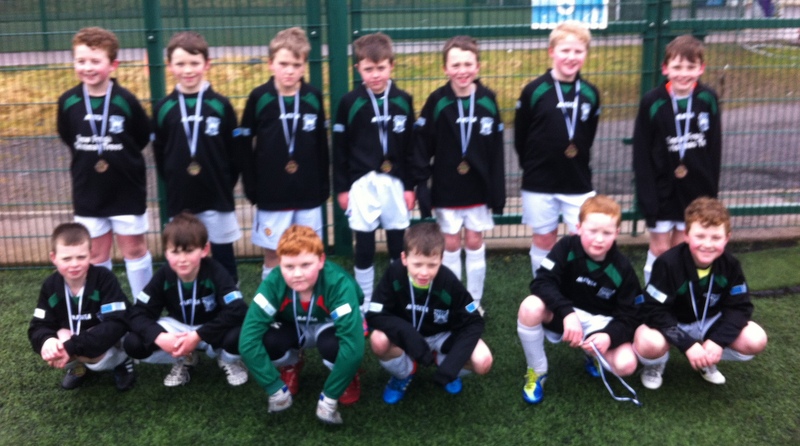 Well done to our U11’s who played their last game last Saturday. These boy’s move up to U12’s when they start back in September. Of course at this stage of the season let’s take the opportunity to thank the coaches and helpers who gave up their time to the team to facilitate our youngsters’ footballing growth throughout the season.

Our U12 team played Dromore last Saturday morning in Gortakeegan for the first game of the season. It was a very exciting game from the start with both teams playing a very fast game. Killylough boys had to work hard to score the first goal but Dromore came back with 3. Killylough were not to give up and drew level with 2 more good goals, then the half time whistle blew.

With it staying level most of the second half Dromore did not give up and despite the hard work and great team effort by our boys they landed 2 in the back of the net just before the final whistle blew.  A great exciting game to watch, well done to all. Scorers on the day where Aaron, Gavin and Bradley.

Training continues Wednesday evening from 7pm on Gortakeegan Astro pitch. NO steel studs. Don’t forget your €2. Shin pads must be worn to training and on match days, also white shorts and socks must be worn on match days. Any player that has still to return registration forms please do so ASAP.

Both of our under 11’s teams put on excellent displays on Saturday last against formidable opposition in Carrick Rovers & Newbliss. At last our training appears to be paying off with excellent passing & movement from both sides on display. Great goals from Gareth Sherlock, John Clifford & Enna McCarney topped off a fantastic all round team performance for the Killylough Celts & a great display in goal by Ciaran Treanor kept Newbliss at bay in the second game. Well done to both teams & keep up the good work this Saturday & Sunday.

The second half of the season kicked off on Saturday & Sunday last and saw both Killylough Under 11 teams in action against Clones Town & Monaghan United. The Killylough Celts played on Saturday against Clones and after a sluggish start the boys started playing well. Good goals from Aaron Murray & Conor McMahon saw a very spirited team performance. Donal McKenna was immense in goals once again and with a few weeks training under their belts the Colts will register some good results in the weeks ahead.

The Killylough Colts played early on a frosty Sunday morning and provided the watching crowd with a feast of football. The passing & movement were fantastic to watch. The brilliant Eoghan McCague & Dylan Carey ran the midfield against a spirited Monaghan Utd. The development of this young team is clear to see and a few more performances like this will make them hard to beat.

Congrats to Fergal Sherlock who this week has been selected to play in the Cavan/Monaghan Under 11’s emerging talent team. Fergal is the first Killylough player to represent the club at this level. One to watch I think!!

Last Saturday saw the Killylough Colts take a well-earned rest while the Killylough Celts took on the formidable Monaghan Town in Gortakeegan. The game was evenly balanced until Killylough midfielder Conor McMahon ran through Monaghan’s defence to break the deadlock. Monaghan didn’t lie down however and only some excellent saves from Killylough’s keeper Donal McKenna, kept them in the game. With the game level deep into the second half up popped that man again, Conor McMahon to score his second with another fine finish. A great game all round and some sterling performances from the Hoops.

The bitter taste of defeat was all that was on offer at Century Homes Park for our under 11’s Team in the Monaghan Soccer Development League on Saturday last. Honours were pretty even in the opening exchanges and both teams could have scored before Carrick broke the deadlock. The first goal was always going to an important one and it proved to be the case on Saturday. A talented & organised Carrick Rovers were in fine form and despite our top scorer Padraig Meehan netting a fine goal in the second half Carrick ended up on top.

Yet another solid performance by our Under 11’s in the Monaghan Soccer Development League in Century Homes Park on Saturday last when we saw off Monaghan United on their home turf. Our defence was immense with Eoghan McCague, Reece McGinnity & Fergal Sherlock in front of Emmett Campbell in goal who kept another clean sheet with a fingertip save in the last few minutes of the game. Sherlock ventured forward on occasion scoring twice, one of which was a stunning free-kick from distance. The three girls in our panel, Miriam Murphy, Shauna Lappin & Louise Connolly all played their part in a real team effort. Great work on the wing by Killian Sherry set up Jack Mohan to score two and the silky skills of Jamie McKenna saw him score his first competitive goal for the club. Well done to all the team & keep up the good work.
TEAM: Emmett Campbell, Colum Claisse, Louise Connolly, Shauna Lappin, Eoghan McCague, Reece McGinnity, Padraig Meehan, Jack Mohan, Luke Mulligan, Miriam Murphy, Cillian G. Sherry, Fergal Sherlock, Jamie McKenna, Cillian Sherry, Niall Sherry, Dylan McCarey, Darragh McKenna

Killylough F.C.s under 11’s kicked off the season in style at Gortakeegan on Saturday morning last with a fantastic display against Newbliss. This was the team’s first competitive game and the weeks of hard training certainly paid off. This was a real team effort with great passing, defending and positional play on display from the whole squad. Some fine goals too from Colum Claisse, Luke Mulligan, Dylan McCarey and cousins James & Cillian Sherry formed a formidable duo up front scoring one each. There was a brace from both Jack Mohan & Padraig Meehan in midfield to round off a great game.

Another exciting high scoring game this week for Killylough Reserves saw the youngsters away to Clones. Clones scored after 6 minutes to go 1-0 up. A great goal brought it back to 1-1 when Tiernan McGonnell scored in the 11th minute. Two minutes before half time Clones went 2-1 ahead.

The second half started in similar fashion with Clones piling on the pressure and they went 3-1 ahead in the 40th min, 4-1 in the 42nd minute and 5-1 in the 46th minute. With the game now looking dead and buried, the Hoops’ youngsters took on some time to refresh and the fight back started with an Adrian Grew goal in the 51st min and indeed he scored again 2 minutes later to leave it 5-3. The fight back continued when Padraig Meehan scored with 5 minutes to go and the equaliser which would have been unthinkable at 5-1 down even to the most hardened fairy-tale enthusiasts, came 3 minutes from time and it was that man again Adrian Grew with a well-deserved hat trick to leave the final score 5-5.

It was hard fought stuff from the youngsters from Tydavnet parish and their dedication paid off with a rollercoaster performance and the most unlikely point they’ll get from a game this season given the earlier deficit. Well done to all involved.

A 9 goal thriller was to ensue in Tydavnet on Sunday for the under 12’s, and as the match kicked off Killylough went 1-0 down within the first 5 mins. Fergal Sherlock equalized after 10mins and Padraig Meehan scored in the 12th min to bring it to 2-1. It took a great save after 19 minutes by Emmett Campbell to keep the Hoops ahead before Adrian Grew scored in the 21st min. 3-1. A penalty reduced the arrears to 3-2 in the 25th min and by the 40th minute it was back to 3-3. Fergal Sherlock scored again in the 50th minute for 4-3. Killylough’s 5th and final goal was a wonderful individual effort from Adrian Grew when he grabbed his second by chipping the keeper for 5-3 and a late consolation goal by the opposition for the final score of 5-4.