On Saturday afternoon last at Gortakeegan, Killylough secured their first  league and Cup Double for 23 years when they overcame a very competitive and hardworking Glaslough Villa side in the final of the Andy Capaldi Cup. Going into the final, Premier League Champions Killylough were very strong favourites but huge credit must go to Villa who certainly provided very stern opposition and the Glaslough side can certainly hold their heads up high after what was very evenly fought game at the Monaghan venue. The opening ten minutes were a very cagey and nervous affair with little in the way of chances. It was Glaslough though who came more into the game and after fifteen minutes Declan Connolly had the first shot on target but his effort was comfortably dealt with by Conor Forde who had a very confident game in goal for the Killylough side throughout.  Soon after Georgie Bolton went close with a lob which just went over and this was followed by a very decent strike by Colin McNally from a direct free kick which again was well dealt with by Conor Forde. As the half wore on though Killylough came a lot more into the game as both Kevin Loughran and Emmet McCrudden began to exert more of an influence.  Killylough almost broke the deadlock on the half hour mark but were denied by some last gasp defending by Villa’s Damian Walsh and Stephen Mulligan. This was followed soon after by a very brave save by John Kehoe in the Villa goal to deny Ronan Stirrat. On 40 minutes Glaslough produced their best move of the half when great link up play between Pauric Redden and Mark Mulligan saw the ball fall to Georgie Bolton who fired just wide. Just before the interval though it was Killylough that almost took the lead as a scramble in the Villa box saw the ball come off the Villa post and the danger was subsequently cleared by Tony Redden. After a tight opening spell neither team could really find the composure needed to play the decisive pass or provide any real threat going forward.  Villa applied a heavy amount of pressure on the Killylough back four to ensure they hadn’t much time on the ball, on a couple of occasions but nothing with really enough venom to cause Forde any problems in Killylough’s goal.

It seemed to be the nearly game for the Tydavnet men going forward as time and again passes hit with a too much pace trickled agonisingly out of play.

The early stages of the second half saw Villa with the best of the play. Firstly, Mark Mulligan got on the end of a cross from Darren Mulligan only to see his effort just go wide and this was followed by a 25 yard strike from Bolton which again was just off target. Like the first half though, Killylough came more into the game. Nicholas Treanor had the first chance as his 20 yard strike sailed just over with Kehoe in the Villa goals looking somewhat relieved after his defense had been slow to react to a cross field pass.  Villa themselves where starting to find some better moves with Stephen Mulligan linking up well with Pauric Redden in midfield. On the hour mark it was the Premier League Champions that seized the initiative when a very well worked breakaway out of the defence saw the ball fall to Killylough captain Emmet McCrudden who found his strike partner Ronan Stirrat in space down the right, and his perfect cross found Kevin Loughran who finished expertly from 5 yards. Darren Quigley came on for the Tydavnet outfit on 70 minutes and as the game stretched with Villa pushing for an equaliser found space wide on the right.  His shot was parried by John Kehoe in the Glaslough goal only to fall to top scorer Ronan Stirrat, who made no mistake from 5 yards. It wasn’t all one way traffic from here on in however and George Bolton could have given Villa a lifeline after his fantastic chest control allowed him to blaze a well taken volley wide from 10 yards.
Villa brought on Chris Curran and Charlie McDonald to help find a way back into the game and Glaslough were desperately unlucky not to have reduced the deficit when Pauric Reddan’s deft header from a Mark Mulligan cross went agonisingly wide. Huge credit to Glaslough though who put the Killylough defence under a lot of pressure but Villa were unable to find a way past a very commanding and resolute Killylough rearguard. Killylough though were always a huge threat on the break with Kevin Loughran causing all sorts of problems on the wing and they could easily have increased their advantage on several occasions but were denied by a series of excellent saves by John Kehoe in the Villa goal. Late in the game Villa went close though a Charlie McDonald strike.  That was to be the last significant action however with Pauric Mc Crudden and Gavin Turley seeing out any more challenge at the heart of the lough defence to leave it 2-0 at the final whistle and bring the curtain down on what has been a tremendous season for the Tydavnet outfit.
At the end of the game Paul Treanor from the Monaghan Cavan League commended both teams on what was a very closely fought and clean competitive match between two neighbouring sides played in a very good spirit. Killylough captain Emmet McCrudden also paid tribute to a Glaslough side who he felt had provided his side with one of the toughest games of the season. McCrudden also paid tribute to his fellow Killylough players and team manager Gerard McCrudden for playing their part in what has been a historic season for the North Monaghan side. Villa manager Alan Smith speaking after the game congratulated Killylough on their victory and on the fantastic achievement of securing a league and Cup double. He also had great words of praise though for his own Villa side for their efforts all season. Although the Villa manager was visibly disappointed after missing out on Cup glory he felt that it had been a terrific effort by his players in securing the Division One Title and reaching the Capaldi Cup Final. He also felt that his players could look back on the season gone by with real pride and that Villa could also look forward to next season in the Premier Division with real confidence. Both Gerard McCrudden and Alan Smith also had particular words of thanks for all the supporters of both Killylough and Glaslough who helped make the Cup Final a very memorable occasion for both Clubs.

It was the men from Eastern Europe who took the lead in the final following some neat build up play.

As the game grew on, Killylough grew stronger and skipper Ronan Stirrat made the pressure tell with the equalizer late on.

It was Hoops who emerged from the shootout victorious and match their piers of 2005 by bringing the Andy Capaldi Cup back home to Tydavnet.

A dull and damp Monday evening was brightened up in Tydavnet by an exciting battle between Killylough and Clones Town. With a place in the Monaghan Cup final at stake, neither side wanted to lose this one and a tense, hard fought six-goal thriller was to unfold.

The home side started well and played some neat football in the opening half but the lethal finishing of the Clones men would gain the upper hand early on. Gaining possession in midfield, Town broke through the middle and Gary McKenna made no mistake from about 10 yards out to put his side ahead. Clones again broke fiercely from midfield 15 mins later to double the lead when another loose ball was picked up and with striker and goalkeeper heading full tilt for each other, Sean Duffy produced a delicate little dink over the diving Mickey Rooney for Clones’ second in the first half hour of the match.  Darragh Stirrat’s precise control and finish went in via the post to half the deficit going into the break but still left Killylough with much to do in the second 45.

The match resumed its fiery pace instantly with both sides creating chances but again it was the Meath league contenders who proved more ruthless. This time it was McKenna who, from the edge of the box, curled an arcing effort into the far top corner to restore his side’s 2 goal advantage. 3-1 down, the Hoops were rattled but unbowed and sought to turn the game around on the double. Substitute John Hammill led the charge with a neat finish when he was put through on 62 mins to reduce the arrears to the slenderest of margins. Then it was Ronan Stirrat’s turn to fill the captain’s role and level proceedings and he did so in spectacular fashion with an equalizing strike out of the top drawer and into the top corner of the net. 3 apiece and extra time beckoned for two sides already having given it all to this point.

The two sides continued to demonstrate their talents in the two 10 minute halves of extra time. John McCrohan could have had a penalty at one end but the final big chance came to a Clones shirt right at the death and as the ball ricocheted off a post and into Rooney’s arms, the match was destined for penalties to separate these teams once and for all. At 4-3 in the shootout, Rooney saved Town’s fourth spot kick leaving Hammill to step up and send Killylough to the final of the Monaghan Cup. Many thanks to all the supporters who turned out for both clubs to witness a thoroughly entertaining spectacle and we hope to see the Hoops’ support out in full voice again for the final on Saturday evening. 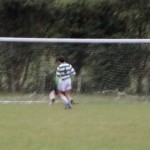 Donagh was the venue for Killylough and Inniskeen Spartans’ keenly contested Monaghan Cup quarter final. The Hoops took the lead in the first ten minutes when Emmet McCrudden finished off some neat build up play by passing the ball into the bottom corner. Spartans didn’t lie down though and were back on level terms shortly after when John Smith found space outside the box and hit a curling dipping effort which flew into the far corner of the net. The South Monaghan men went on to take the lead when Smith lined up a free kick on the edge of the box and found the other top corner to complete the turnaround. 2-1 Spartans at the break.

A resurgent Killylough side returned after the break eager to turn the game around once more. Skipper Ronan Stirrat lead the charge, collecting the ball just inside his own half wide on the left and ended a fine run by curling the ball around an in-form Alan Steele to level matters. Having a fine game also were Inniskeen centre-halves Paul Dooley and Declan Ruddy but they were under more intense and constant pressure now as the Tydavnet side pushed hard for the winner. Indeed the moment was to come and it was set up by Darren Quigley whose well timed run saw him round the keeper and square the ball for Noel McCabe to pot the winner. Chances came and went at both ends but 3-2 was the finishing scoreline in favour of Killylough, who go on to meet Cones Town in the semi on Monday.