To a capacity Cornagilta attendance on Wednesday 30th November 2022, Marie McKenna from Tydavnet Historical Society gave a comprehensive history of Golagh House, Scotstown which was razed to the ground on 25th February 1921. Many of the audience members came from the Gola townland, and it was very enlightening to find out what an amazing history that Gola House held. Marie traced back to the colonization of Monaghan in the Elizabethan era – the division of the county into 5 baronies, and the dominance of the McKenna and McMahon families in the county – the crannog on Hollywood lake being occupied by Patrick Art “Maol” (bald) McMahon, and the presence of many local ringforts. She also referenced the 1641 Rebellion in Monaghan where Patrick’s two sons were killed, and later Cromwell’s conquest in 1649, and the establishment of Golagh demesne when James Wright, a captain in Cromwell’s army was granted the rent of the land, most likely in lieu of pay, in 1653 – later buying it in 1666,along with local townlands of Eshacrin, Eshnaglogh, Kilmore West, Acres, Cornacrieve, Cornaguilla, Milligan, and Sruveil. This James married Jane Owen, and following her death, he married Mary Slacke of Slacksgrove (Hollywood). Their six children had links to Kilmore, Clontoe, Carrachor, Drumloo, Dartrey, and Drumreask. Locally, the battle of Drumloo took place from 1688-1689, and this was recalled in an article from The School’s collection 1938. James Wright of Golagh was buried in Tydavnet Old Cemetery in 1700, and moving on from there, Marie traced the Wright family to their connection with Captain James Wood of Dorset – assuming the surname Woodwright – in order to retain the Wright name in Gola, and this James became High Sheriff of Monaghan in 1825. Gola house and it’s former residents have links to the Ballinode Church Clock, Mullaghfad Church, Dublin’s Mansion House, South Africa, and the local estates of Ballyleck, Rossmore Park, and Dacre Hamilton’s Cornacassa. The first Ordnance Survey maps of 1836 show clearly the lie of the land on the estate, with the big house and outbuildings of stables, coach house, harness room, cow and calf houses, dairy, piggery, fowl house, barn, turf house, potato house, workshop, sheds, and stores, and Marie also included a number of previously unseen photos of the estate down the years. It was a very comprehensive history – well researched, and yet delivered with her usual matter of fact style making it thoroughly engrossing for everyone in attendance. It was indeed a fantastic night bringing into focus some of the local heritage gems we have on our doorsteps. Thank you very much to Marie and Heather for their fantastic research, and to everyone who came along to learn a little more about the townland of Gola Irish and Gola English in days gone by. Thanks also to Marie McQuillan and the Cornagilta Committee for all their help with providing a warm and welcoming venue for the lecture. 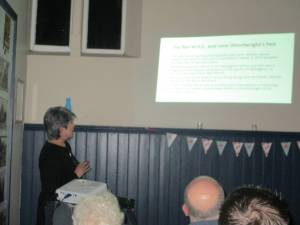 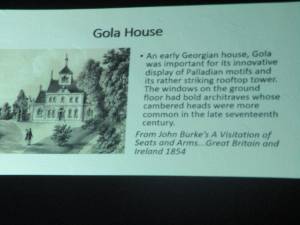 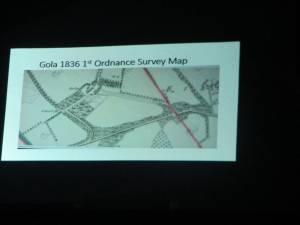 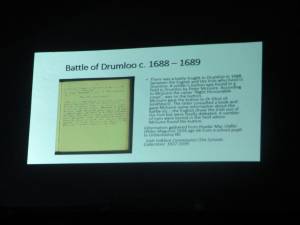 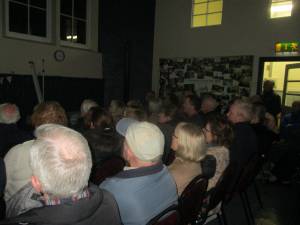