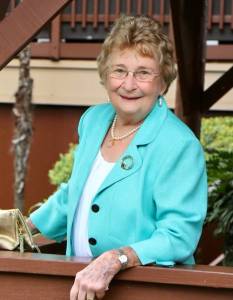 Margaret Ward entered  eternal rest on January 13th 2022, at the age of 89, surrounded by her loving family, at her home. She was predeceased by her husband of 50 years, Mickey Ward, and by her brothers Patsy, Frank, Peter, Gerard, and her sister Kathleen.

Margaret, the eldest of ten, was born to Peter and Mary McKenna, of Doogary, Tydavnet, Monaghan. At aged 15, Margaret went to work in the County Hospital to help support the family. In 1954, she emigrated to New York with her sister Kathleen. Margaret met her future husband Mickey at a St Teresa’s of Avila church dance, and they went home to Monaghan to get married in 1958.

Margaret and Mickey settled in Bay Ridge, Brooklyn, where they raised their 5 children, Seamus, Thomas, AnnMarie, Geraldine, and Pauline. Margaret also worked as a waitress and was able to study and proudly received her GED.

Mickey and Margaret moved to Pearl River, New York in 1994 where they became involved with St Margaret’s Church as Eucharistic Ministers, and Margaret was a member of the Rosary society. Ireland was never far from Margaret’s heart. She and Mickey were members of the Donegal Association and promoted Irish culture and was often seen marching in the St Patrick’s Day parade in New York City and Pearl River. Margaret continued to go back every year for the past 35 years to Monaghan and Donegal to see her siblings, nieces and nephews, and old friends.

Even though Margaret has been in America for 67 years, she never lost her Irish brogue which could be heard when she was telling a joke, a story, or laughing. Margaret’s Irish brown bread was a daily staple in her home and her YouTube video of how to make Irish brown bread is a big hit!

She loved to travel to new destinations with her family and friends and had her passport and bag at the ready.

In later years she could be found reading the Daily News, doing crosswords, watching Jeopardy and Wheel of Fortune while making Rosary Beads. As a loving mother, Margaret always made her children feel as though they were the most cherished one.

With great love comes great sorrow, Margaret will never be forgotten by her grieving family, and they appreciate the help they received from Immacula, Gina, and Evelyn who helped take care of her over the past year.

May Margaret rest in peace.

Please register your Defibrillator! Call to voluntary groups and businesses in the area