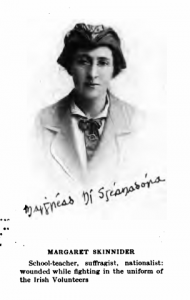 To mark the 50th anniversary of the death of Margaret Skinnider in October 1971, the local Appreciation Society is having a wreath laying ceremony at the memorial monument in Cornagilta, Tydavnet, at 2.30pm on next Sunday 24th October. Incidentally, Sunday’s date is the anniversary of the death on 24th October 1897 of Francis Turner Palgrave who designed the Neo-Gothic Cornagilta schoolhouse for Miss Gertrude Rose of Mullaghmore, and Margaret Skinnider’s father and mother both died in the month of October – her father James died on 17th October 1917, and her mother Jane (nee Dowd/Dowd) perished in the sinking of the Rowan in the early hours of 9th October 1921. There will be a number of guest speakers at the commemorative event, including Deirdre O’Connor, Deputy General Secretary/General Treasurer of the INTO and Stephen Coyle, Secretary of the 1916 centenary committee Scotland. As the local roads are narrow, strictly no roadside parking please. Parking is available at the local Cornagilta School Heritage Centre Eircode H18 ED89, and directly across from the School, at Fergal and Teresa Brady’s Eircode H18 WC03. The monument is located 300 metres from the car parks. As this is a community event everyone is invited for what will be an historic occasion for the parish and further afield. All are welcome to meet afterwards in Cornagilta School Heritage Centre for light refreshments and entertainment. 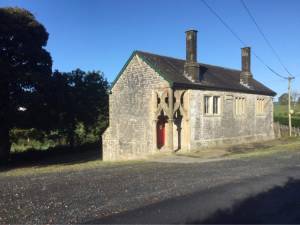