May 14, 2020 / Admin Member / 0 Comments
Tomorrow, 15th May, is the feast of St Dympna, the patron saint of our parish. She is the patron of those suffering for nervous and mental afflictions Located in the townland of Caldavnet (Cúil Damhnata), north west of Tydavnet village, St. Dympna’s Holy well site has sacred, religious, cultural, archaeological and biodiversity significance. Usually there would be a community walk to the Well on the Sunday, but due to Covid 19 this is not happening this weekend. We hope to have a walk during Heritage Week in August, and if that happens we will notify people in good time. St Dympna’s Well is on private property, and we appreciate the cooperation of the landowners who facilitate access to the well each year. We also remind people of the danger of visiting the site – it’s isolated and difficult to access if an emergency event happened, it’s a working farm with mechanical machinery and rough slippery underfoot conditions, it’s a walk that only those with reasonable fitness would be able to undertake, and at the minute the cattle and bull are back in the fields, and domestic farmed and wild deers (with stag) have access to the site. The landowners have requested that while people often take photos of their visit to the site, that no images (photos or videos) are uploaded to social media please. Your cooperation in this regard is appreciated. 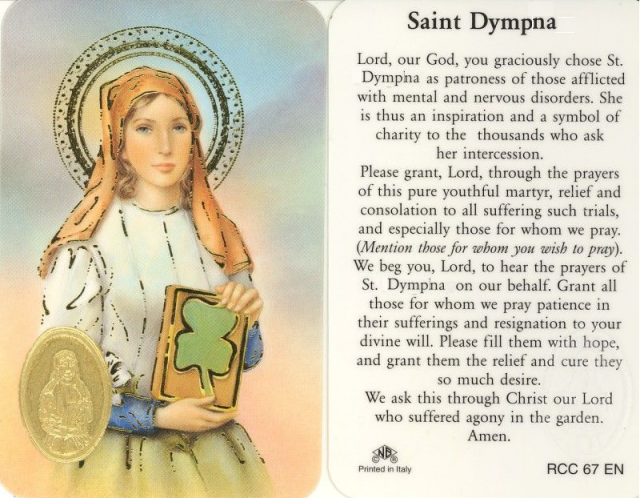 Dympna was born in Ireland sometime in the seventh century to a pagan father and devout Christian mother. When she was fourteen, she consecrated herself to Christ and took a vow of chastity. Soon afterwards, her mother died and her father – who had loved his wife deeply – began to suffer a rapid deterioration of his mental stability. So unhinged was Dympna’s father, Damon, that the King’s counsellors suggested he remarry. Though he was still grieving for his wife, he agreed to remarry if a woman as beautiful as she could be found.

Damon sent messengers throughout his town and other lands to find woman of noble birth who resembled his wife and would be willing to marry him, but when none could be found, his evil advisers whispered sinful suggestions to marry his own daughter. So twisted were Damon’s thoughts that he recognised only his wife when he looked upon Dympna, and so he consented to the arrangement.

When she heard of her father’s misguided plot, Dympna fled her castle with her confessor, a priest named Gerebran, two trusted servants, and the king’s fool. The group sailed toward what is now called Belgium, and hid in the town of Geel. Though it becomes uncertain what exactly happened next, the best-known version claims the group settled in Geel, where Dympna built a hospital for the poor and sick, but in using her wealth, her father was able to discover her location. When Damon found his daughter was in Belgium, he travelled to Geel and captured them. He ordered the priest’s head to be separated from his body and attempted to convince Dympna to return to Ireland and marry him. When Dympna refused, Damon became enraged and drew his sword. He struck Dympna’s head from her shoulders and left her there. When she died, Dympna was only fifteen-years-old. After her father left Geel, the residents collected both Dympna and Gerebran’s remains and laid them to rest in a cave. In defence of her purity, Dympna received the crown of martyrdom around the year 620 and became known as the “Lily of Éire. In 1349, a church honouring St. Dympna was built in Geel, and by 1480, so many pilgrims were arriving in need of treatment for mental ills, that the church was expanded. The expanded sanctuary was eventually overflowing again, leaving the townspeople to accept them into their homes, which began a tradition of care for the mentally ill that continues to this day.

Unfortunately, in the 15th century, the original St. Dympna Church in Geel burned to the ground, and the magnificent Church of St. Dympna was erected and consecrated in 1532, where it still stands above the location her body was originally buried. Many miracles have been proven to take place at her shrine in the church erected in her honour, and her remains were placed in a silver reliquary in the church. Some of her remains can also be found at the Shrine to Saint Dympna in the United States. The priest who had helped Dympna was also sainted, and his remains were moved to Xanten, Germany. The United States National Shrine of Saint Dympna is at St. Mary’s Catholic Church in Massillon, Ohio and St. Dympna’s Special School can be found in Ballina, County Mayo, Republic of Ireland. Saint Dympna is the patroness of those suffering nervous and mental afflictions as well as victims of incest. Traditionally, Saint Dympna is often portrayed with a crown on her head, dressed in royal robes, and holding a sword. In modern art, Saint Dympna is shown holding the sword, which symbolises her martyrdom, quite awkwardly. She is also often shown holding a lamp, while some holy cards feature her wearing green and white, holding a book and white lilies.

Littering at “Bring Banks” a problem during Covid 19 lockdown