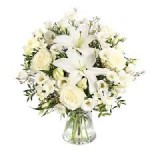 Reposing at her son Francis and daughter-in-law Patricia’s residence from 6pm to 10pm on Monday 2nd of December and 2pm to 10pm on Tuesday 3rd of December, Eircode: H18EC95. House strictly private at all other times please. Margaret’s Funeral Mass will be celebrated on Wednesday 4th morning at 11am in St Mary’s Church, Urbleshanny, Scotstown followed by burial in adjoining cemetery. Home private on Wednesday morning please. Family flowers only please. Donations to Club for the Elderly Tydavnet, Monaghan Palliative Care and Drumkill Day Centre for Alzheimers c/o Peter McMahon Funeral Director, McMahons Funeral Home, Emyvale, Co. Monaghan. May she rest in peace.