There was a full house in Cornagilta School Heritage Centre on Wednesday 29th November 2017 for Tydavnet Village Community Centre’s presentation about the Penal Cross on Bragan, Sliabh Beagh.

The evening started on a sad note with a vote of sympathy to the family of the late Liam Stirrat from Scotstown, and to Maggie Greenan from Ballinode on the recent passing of her brother Joey in New York. Liam and Joey were great community people and  supporters of Scotstown GAA. May they rest in peace.

Marie McKenna presented a wonderfully researched and entertaining Powerpoint presentation about “The Cross”, setting it in historical context since the Plantations in the 16th and 17th Century, the confiscation of land by the English Crown, and the colonisation of this land with settlers from Britain. Marie also outlined the impact of Plantation of Munster, the Nine Years War, and the Battle of Kinsale 1601, and The Treaty of Mellifont. The Flight of the Earls in 1607 was a watershed in Irish history as the ancient Gaelic aristocracy of Ulster went into permanent exile.  In Monaghan in 1607, Attorney General to James 1, Sir John Davies, travelled throughout Ulster surveying the area, and he described Monaghan as “the wasted and wildest part of all the north“, while also warning that “the power of the Ulster chieftain was truly broken and hungry undertakers were waiting for their prey“.

Marie’s research also included local links to the story, the presence of 2 altars and 1 Mass House in the area in the 1741 survey for “Clogher’s Altars of the Penal Days” – a field called Carraig an Aifrinn in Feebaghbane, Pol an Aifrinn between Eshcloghfin and Knockballyroney, and Leac an tSagairt between Esh and Bragan. There is another mass rock on the Tyrone side known as Carraig or Cnoc an hAltair, near to the “Peck of Hay” hill. The Penal Cross, the subject of the presentation, and one of the most photographed items in the region, is in the townland of Broughan Shee Bragan and Esh. Fr Victor Marron got permission to erect the cross from Mick Neiley McKenna and Paddy Felix McKenna, the joint owners of the land there in 1938. A Druidical Stone, made from local sandstone, was used as a Mass altar and was situated down below the cross, however, this large stone has been removed from its rightful place at the Cross site by someone. Wouldn’t it be great if someone can pinpoint where it is now and arrange to have it replaced before the 80th anniversary of the placement of the Cross in September 2018!

The presentation moved on to the erection of the cross on the Bragan site in September 1938, and Marie had lots of information on the day itself, who was there, what bands played, and how the ceremony proceeded. Indeed, it was also wonderful to have a contribution from Frank Clerkin, formerly from Knockballyroney who penned his memories of the event in the form of an informative letter to the Tydavnet Historical Society Committee. Frank now lives in London, and he was seven years of age when the Penal Cross was erected. He recalled that Stuarts Monumental Works delivered the Carlow Limestone cross to up behind Murray’s house in Knockballyroney, and his older brother Barney Clerkin and his neighbour Paddy Murray used a “slipe” drawn by two horses to haul the cross to it’s destination. The inscription on the cross reads “To the memory of the priest who was shot here while celebrating Holy Mass on Christmas Day about 1754. Tradition assigns the name of Fr McKenna to this martyr of the Penal Days. Erected September 1938.

Congratulations to Marie on a wonderfully researched and engaging presentation, with an opportunity for discussion at the end. As always, a history presentation like this is just the start of encouraging discussion and memories to build up a body of knowledge and inquiry. It was great to hear the facts and folklore about the site.

Thanks to Cornagilta School Heritage Centre for a lovely, warm, comfortable venue for the presentation, to everyone who came along from areas of north Monaghan, Fermanagh, and south Tyrone, to Frank Clerkin for his information and memories, to the Cornagilta and Urbleshanny schools for equipment, and to Heather and Ruby for the lovely refreshments. The next presentation of Tydavnet Historical Society will be on WEDNESDAY 31st January 2018 (weather permitting), with the fantastic topic of “Ringforts in Tydavnet Parish”, get to know all about the archaeology, sociology and purpose of the ringforts, everyone welcome, admission €5, refreshments served. 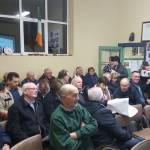 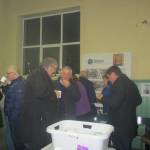 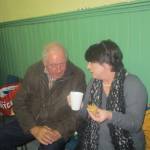 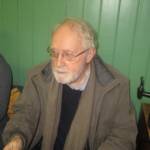 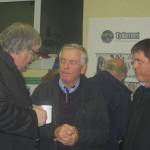 Activities for everyone at Monaghan U3A, why not join up?