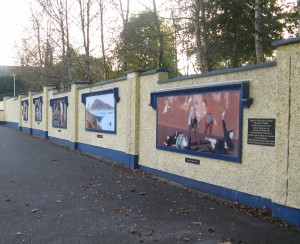 The legend of St. Dympna has its origins in an event that has been embellished over the centuries; a story that has been handed down from generation to generation and as a result has not always remained strictly accurate. It is in fact a mixture of historical fact and fertile imaginations. According to the legend Dympna was the daughter of an Irish pagan king and a beautifull Christian princess. The legend leads us to believe that this royal family lead their lives in a state of tranquillity and peace. Alas the happiness was a fragile one. Dympna’s mother died and the king was inconsolable. His courtiers advised him to find a new wife. The king agreed to this on condition that they find him a woman who was the exact image of his late wife.  The obvious choice was Dympna his daughter who was appalled when her father asked for her hand in marriage. She decided to flee accompanied by her confessor Gerebernus and a maid. The first day’s journey brought them across Slieve Beagh to Cooldavnet [a townland adjacent to the village] where they rested and drank from the cool bog water of a small well. To this day people travel and pray at this well and drink from its boggy water. Legend has it that those suffering from any kind of mental illness will find relief and comfort here. 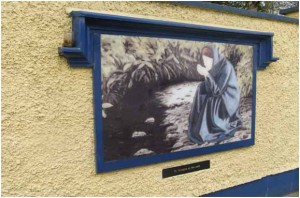 Mural in Tydavnet depicting St. Dympna drinking from the well at Culdavnet

They continued their journey to Tydavnet where once again legend has it that they rested for the night and she performed a miracle before travelling onwards to Lavey and then Achill. From there they crossed the sea to Antwerp their final destination being Gheel a small town in Northern Belgium.  However the pagan king and his followers were hot in pursuit of Dympna and once again legend has it that the king in an incestuous rage beheaded his daughter and her faithful followers in Gheel. People who witnessed the execution were said to be instantly cured from illness of the mind and this is the reason that St. Dympna became the patron saint of those suffering from Mental illness. These murals were commissioned by Tidy Towns and painted by Martin Murray, Tydavnet. 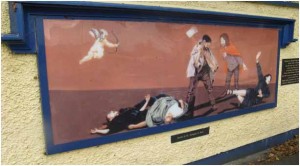 Mural depicting the life and death of St. Dympna

This Crozier dating back to the 9th or 10th century was in the hands of the Lamb or O’ Luain family who originally came from Tydavnet. O’Luain was a very honourable name found among the ancient families in Oriel. St. Dympna is thought to be a descendent of one of the ancient chieftains of Oriel. Dr John O’ Donovan in 1835 when compiling the Ordnance Survey Memoirs visited the Lamb family in Tyholland and elicited that Bachall Damhnait had been in their family for generations and had been passed down as an heirloom (Clogher Record1959 Rev. B O’ Daly. ) Bachall Damhnait was thought to have amazing powers and was used for swearing on. If the person swore falsely some dreadfull change in the countenance was the result. The mouth was supposed to turn upwards towards the ear. Such was its fame that if a person was threatened with Bachall Damhnait they usually came and acknowledged their guilt rather than suffer the consequences. It is now given a place of honour in the National Museum and is exhibited in a special cabinet for Croziers in the gallery of early Irish art. This gallery also contains treasures like the Ardagh Chalice, Tara Brooch, St. Patrick’s Bell and the Derrynaflan Chalice and Paten.