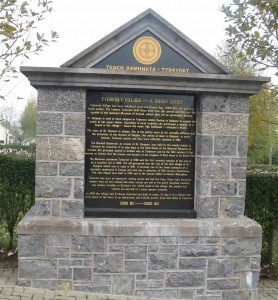 Tydavnet village has been inhabited since the Bronze Age (2000 BC) and probably much earlier.  The famous Tydavnet Gold Discs date from the period and they are the symbol of the National Museum of Ireland, where they are on permanent display.

St Dympna is said to have stopped in Tydavnet, whilst fleeing to Belgium to escape the wrath of her pagan father. According to local tradition she performed a miracle in a house in the village, hence the name ‘Tigh Damhnait’ or house of Dympna. The story is unique. She is the patron saint of the mentally afflicted and the patroness of the diocese of Clogher. Her shrine at Geel in Belgium is world famous. Tydavnet parish and Gheel were

officially twinned in 1992. The Bachall Damhnait or crozier of St Dympna was held by the Lambe family in Tydavnet for centuries. It is now kept in the Gold room in the National museum of Ireland. Her principal church in Ireland was at Tydavnet and by the 15th century it had become so famous that the princes and dynasts of the kingdom of Oriel chose to be buried there.

The Normans plundered Tydavnet in 1206 and the first recorded mention of the area is on a taxation list in 1302. The old graveyard was the site of the first chapel of St Dympna which was in ruins in 1641. The graveyard contains one of the finest examples of a mortality tombstone and also has a collection of 18th century headstones. The new chapel was built in 1784 and is the second oldest in Co Monaghan.

Tydavnet was once an important trading centre and had five fairs. These fairs attracted dealers from all over Ireland and many stories are told of the grisly reception awaiting any unwary traveler at Skelton’s Inn which stood in the village. Our modern day visitors are assured of a warmer welcome. In 1834 the village had five houses, thatched and built of stone. Today it’s a vibrant and lively place at the heart of an industrious and friendly parish.