Our rich heritage of traditional music and folklore around our area is one of our most valuable assets. We are very proud of the fact that one of the founders of Comhaltas Ceoltoiri Eireann was from our area and was principal teacher in Tydavnet School until his death in December 1966. This man, Éamonn O’Muirí, was an accomplished musician and cycled many miles to pass a night in the company of many of the famous fiddlers and pipers of the Knockatallon –Roslea area. Down the years he devoted much energy in bringing them together with other Co. Monaghan musicians so that he was able to collect and preserve a wealth of music traditional in the border area that might otherwise have died out. He also collected a wealth of information for the Irish Folklore committee and contributed to the Northern Standard in the early nineteen thirties under the pen name ‘The Mountain Lark’. Comhaltas was formed in 1951, and in 1952 the first Fleadh Cheoil Na hEireann was staged in St. Macartan’s hall, Monaghan. From there it went from strength to strength and there is now a branch of Comhaltas in almost every parish in Ireland and also in other places throughout the world. Our local group in the area is named after this man and over the years many of our young musicians have excelled both at National and international level. 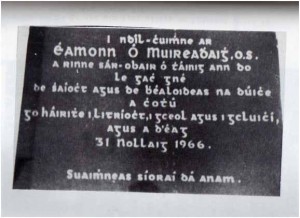